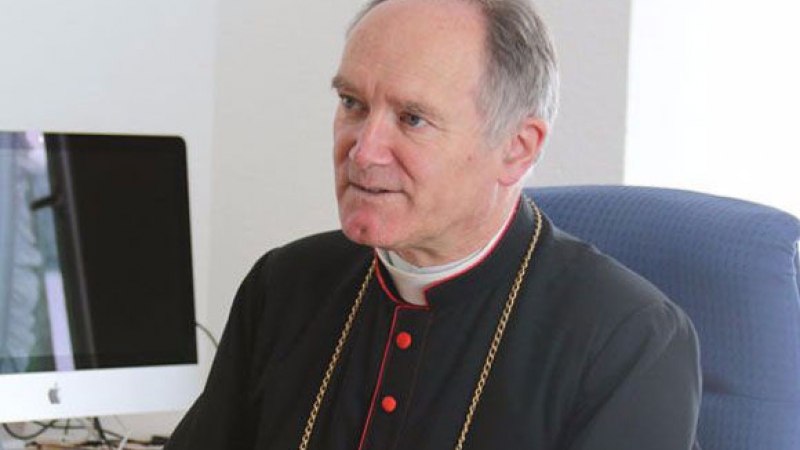 Luther's private judgment denies the need for supernatural authority and makes unity in the truth impossible. This principle amounts to denying the need for a supernatural, infallible authority that can impose itself on particular judgments. Thus stated, what Protestant would feel the need to convert? Furthermore, this new attitude causes the loss of faith in countless Catholics.

Five hundred years ago, Martin Luther rebelled against the Church, taking a good third of Europe along with him. It was probably the most significant loss that the Catholic Church has had to suffer during her entire history, after the Eastern Schism of 1054. He thus deprived millions of souls of the necessary means of salvation, separating them not just from one religious organization among others, but actually from the one Church founded by Our Lord Jesus Christ, denying its supernatural reality and the necessity of it for salvation. He completely distorted the Faith, rejecting its fundamental dogmas, which are the Holy Sacrifice of the Mass, the Real Presence in the Eucharist, the priesthood, the papacy, grace, and justification.

At the foundation of his thinking, which even today is that of Protestantism as a whole, is private judgment. This principle amounts to denying the need for a supernatural, infallible authority that can impose itself on particular judgments and decide debates between those whom she is commissioned to guide along the path to Heaven. This principle, which is claimed explicitly, quite simply renders the act of supernatural faith impossible, since the latter is based on the submission of the intellect and the will to the Truth revealed by God and taught authoritatively by the Church.

Private judgment, set up as a principle, not only cuts off access to the supernatural faith which is the way of salvation (“He that believeth not shall be condemned,” Mk 16:16), but also makes unity in the Truth impossible. He thus established in principle for Protestants the impossibility of eternal salvation and of unity in the Truth. And in fact the number of Protestant sects has not stopped increasing since the 16th century.

In the face of such a distressing spectacle, who would not understand the maternal efforts made by the true Church of Christ to look for the lost sheep? Who would not welcome the many apostolic attempts to liberate so many souls locked up in that fallacious principle that forbids them access to eternal salvation? This concern for their return to the unity of the true Faith and of the true Church runs through the centuries. It is not at all new; consider the prayer recited on Good Friday:

Let us pray for heretics and schismatics, that our Lord God may deliver them from all errors and may deign to bring them back to our Holy Mother, the Catholic and Apostolic Church.

Almighty and ever-living God, who savest all and dost not wish that any one should perish, look at the souls deceived by the diabolical fraud, so that the hearts of those who err, having set aside all heretical perversity, might repent and return to the unity of Thy truth. Through our Lord Jesus Christ.

This traditional language leaves no room for the confusion that is so widespread today in the name of a false ecumenism. The warnings of the Congregation of the Sacred Office in 1949, following several papal documents, the most important of which is certainly the Encyclical by Pius XI, Mortalium Animos (1928), these fair warnings seem now to be a dead letter. Nevertheless, the dangers of this ecumenical irenicism, which was denounced by Pius XII in Humani Generis (1950), are immense and extremely serious, because it discourages conversions to Catholicism. What Protestant, seeing the “riches” and the “venerable traditions” of Luther’s Reform being praised, would feel the need to convert? Besides, the very word “conversion” is currently banished from the official Catholic vocabulary when it is a question of other Christian denominations.

Furthermore this new attitude, made up of praises for Protestantism and apologies for Catholicism, causes the loss of faith in countless Catholics—this is an observable fact. Every survey inquiring about the faith of Catholics shows the ravages resulting from this frightening alignment with Protestantism. How many Catholics are affected in the 21st century by what the Church condemned, until the Council, by the name of indifferentism? A fatal error that claims that the whole world is saved, whatever one’s religion may be. An error diametrically opposed to the teaching of Our Lord Himself and of the whole Church after Him. Nevertheless, if someone denounces this error against the two-thousand-year-old Catholic Faith, he is immediately branded as a fanatic or a dangerous extremist.

The new liturgy, too, was invented in the name of this new ecumenism. It has so many parallels with the Protestant Lord’s Supper that several Protestant theologians, for example, Max Thurian in Taizé, have been able to state that it is possible for their co-religionists to use the new Catholic missal. And during this time the children of the Catholic Church found themselves deprived of the most beautiful treasures of divine worship and of grace. Thank God, Benedict XVI courageously declared that the many-centuries-old liturgy had never been abolished, but—for more than 40 years, throughout the world—the postconciliar liturgical reform drove millions of the faithful from the churches, because they no longer found what they expected of the Catholic Church.

How can anyone be surprised, then, that this ecumenism, which is supposed to promote the unity of Christians, makes but little progress?

Archbishop Marcel Lefebvre, from the Council on, denounced this new way of dealing with the Protestants that took shelter under the name of ecumenism. In fact, this very elastic term expresses a general manner of seeing and doing that was introduced into the Church at the time of Vatican II. We are talking about an ostentatious benevolence toward all human beings, a determination to no longer condemn error, a search all over the map for “what unites us” rather than what separates us.... And what ought to have been only the first step in a journey toward unity, within the framework of a captatio benevolentiae [a rhetorical gesture to win good will], rapidly turned into a pursuit for its own sake that became an end in itself; an unending quest for an undefined truth. It then strayed from its objective purpose: the return to the Church of those who have lost unity with her. Thus the meaning of the word ecumenism was changed, the concept of unity was modified, and the means of arriving at it were falsified.

In the past, the Church knew that she is the only true Church and proclaimed it loud and strong, but this traditional clarity has been replaced by a new, uncertain doctrine—a mixture of apologetic self-denigration and post-modern relativism (for example, “we do not possess the whole truth”), which currently leads a majority of Catholics to reject the statement that there is only one way of salvation, and that we have it from Jesus Christ Himself that “I am the way, and the truth, and the life. No man cometh to the Father, but through me” (Jn 14:6).

The dogma “Outside the Church there is no salvation” has been changed surreptitiously by confused ideas, to the point of altering the statement that the Church of Christ and the Catholic Church are identical. Cardinal Walter Kasper, then-President of the Council for Promoting Christian Unity, saw the new definition of the Church (subsistit in; “subsists in”) as the thing that quite simply made possible the ecumenism that has been promoted since the Council. Coming from a figure like that, this is a fitting admission that should be taken seriously!

That, in a few words, is why we cannot celebrate joyfully the 500th anniversary of the Protestant Reformation. Quite the contrary, we lament this cruel division. Following Our Lord, we pray and work so that the lost sheep might find again the path that will lead them safely to salvation, the path of the Holy Roman Catholic Church.

We pray also that this illusory irenicism will soon be abandoned and that in its place a true movement of conversion may be reborn, like the one that existed before the Council, particularly in English-speaking countries.

Finally, during this centenary of the apparitions of Our Lady to the three shepherd children of Fatima, we pray also that the requests of the Most Blessed Virgin Mary may be heard. She promised the conversion of Russia, when the Supreme Pontiff will be so kind as to consecrate this country explicitly to her Immaculate Heart. Let us redouble our prayers and sacrifices, so that the promise of the Mother of God may become a reality, without delay.

The news site of the SSPX

Get to know Archbishop Lefebvre, visit the website marcellefebvre.info